Possessing a Weapon During DWI Leads to Additional Charge 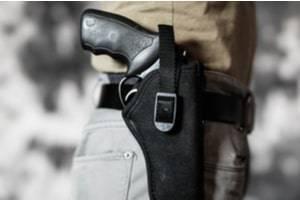 Many Texas residents have gone through the required steps in order to receive a license to carry (LTC) a firearm. The process involves submitting an application, taking state-approved training courses, and showing that their record is clear of any recent criminal charges. With an LTC, residents are allowed to carry an open or concealed weapon in most public places. However, legal gun possession can become a crime if you are being charged with committing another criminal offense at the same time, such as driving while intoxicated.

Let us say that you have an LTC and are driving with your weapon either on your person or somewhere in the vehicle. A police officer stops you and, after observing your behavior, decides to arrest you on suspicion of DWI. The officer finds your weapon while searching your body or vehicle. Under Texas law, you may now receive an additional charge of unlawful carrying of a weapon, which is a Class A misdemeanor. How can you be unlawfully carrying your weapon when you have a valid LTC? Texas law states that it is unlawful to carry a weapon while committing a criminal offense, such as a robbery, assault, or, in this case, driving while intoxicated. The same weapon charge may apply if you are caught driving with an open container of alcohol in your vehicle.

What Is Your Defense?

One issue to consider if you have been charged with unlawful carrying of a weapon during a DWI arrest is whether the police officer was conducting an illegal search when they discovered the weapon. Just because the officer suspects you of DWI does not give them the right to conduct a search without a warrant.

The surest way to defeat your unlawful carrying charge is to defeat your DWI charge. If you are not convicted of DWI, then the weapon charge will be dropped. There are several defenses for a DWI charge, such as:

Carrying a weapon when you are arrested for an alleged DWI means you will face an additional charge. A DWI conviction also means that you would lose your LTC for at least five years. A San Antonio DWI defense attorney at the Law Offices of Sam H. Lock has helped many clients avoid DWI convictions and retain their freedom. Schedule a free consultation by calling 888-726-5625.