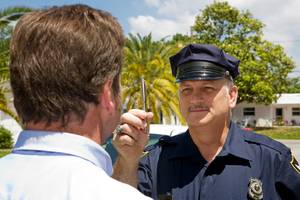 Field sobriety tests are one of the initial tools police officers will use to determine whether someone is driving while intoxicated. Officers administering the tests are looking for signs of delayed reactions, poor coordination and an inability to follow directions, which may show that the driver is impaired. Officers and prosecutors have come to assume that certain standard tests are reliable in predicting intoxication. However, the tests do not definitively prove intoxication. Defendants can contest their DWI charges if the evidence relies too much on the field sobriety test results.

The National Highway Traffic Safety Administration adopted the standard field sobriety tests based on a California study conducted during the late 1970s. Police officers were asked to judge whether subjects were intoxicated by using various field sobriety tests. Researchers identified three tests as having the highest accuracy rates:

However, even the most accurate tests will include cases of false positives. Studies generally show that between 10 and 20 percent of subjects are misidentified as being legally intoxicated when using the standardized tests. Some researchers argue that the accuracy of the results can be misleading if the study involves subjects whose blood alcohol concentration is far beyond the legal limit. The study does not help measure the accuracy of a test if an officer could easily determine a subject’s intoxication without it.

Police officers developed field sobriety tests as the best means to judge impairment before administering breath or blood tests. They were never meant to be a measurement of whether a driver has a BAC over the legal limit. False positives that lead to arrests occur because:

There is no legal penalty in Texas for refusing to submit to a field sobriety test. With the risk of a false positive, there is little reason for drivers to agree to the test. However, refusing the test may not prevent officers from arresting drivers if there is other evidence. A jury may believe that refusing the test is a tacit admission of guilt.

Results from field sobriety tests are meant to give cause for police to arrest you on suspicion of DWI, not provide definitive evidence that you were intoxicated. A San Antonio DWI defense attorney at the Law Offices of Sam H. Lock can contest the use of field sobriety test results as convincing evidence against you. Schedule a free consultation by calling 888-726-5625.